While Truffaut's debut feature "The 400 Blows" is generally considered his greatest achievement, I prefer the film he did right after that - which I am reviewing now. "Shoot the Piano Player" is an incredibly inventive ode to the American B-grade crime pictures of yesteryear. The story revolves around a piano player - named Charlie (played by Charles Aznavour) - who needs to help his brothers out, as they ripped off two gangsters by taking all of "the loot". Of course we also have a tad bit of romance, which in this case is between Charlie and a woman name Lena, who works at the same club he does. Really though - like many French New Wave films - the plot isn't the important part of the film. The element that makes "Shoot the Piano Player" different from many other films with similar stories is that it uses cinematic tricks that you won't find in say a 1930's Warner Bros. gangster picture (e.g. shots that aren't in linear order).

"Shoot the Piano Player" is a definite buy for all fans of French cinema. It has everything you could want in a film of its kind and more. 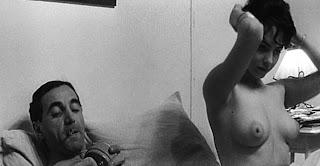