"Vivre Sa Vie" may very well be Godard's greatest film and it is without a doubt the most serious of his early 60's films. Our main character Nana (played by the rare beauty that is Anna Karina) changes from selling records to selling flesh. Over a short period of time, she changes from resisting to kiss a client to practically throwing herself onto them. She works her way up until ultimately being killed by some thugs, after wanting to leave 'the business'.

The story sounds cliched, but is actually quite different from any film I've seen (though I was reminded slightly of Pabst's "Pandora's Box"). "Vivre Sa Vie" is almost not a film, but rather a novel (which in fact makes sense, as it is split into 12 tableaux - or 12 chapters). Film wise, it employs all the great trademarks of a Godard film - from the type of dialogue the characters use to the odd, yet genius music cues.

Seeing Rialto's new 35mm print (which I saw on the big screen at SIFF's Godard's 60's series) makes Raoul Coutard's cinematography on "Vivre Sa Vie" even more beautiful to look at. When Criterion releases this in the near future (which I know they will as you can already buy the poster on their website), I will buy it the day it comes out. 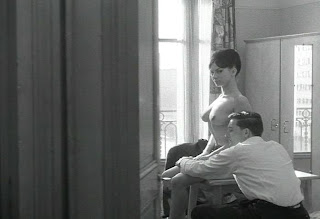